When the technology of painterly representation had approached photo-realism in the 1700’s, academic art filled the museums and sitting rooms, but eventually its practitioners came under attack for their trite formulations. A series of movements attempted to recapture the experience of a scene: Impressionism its atmospheric qualities; Expressionism the observer’s sensitivities; Cubism the fragmentary memory; and Fauvism the raw sensation. Progressively, the artist sought not to render a scene, but to evoke a response in the viewer.

When I met Steve Richardson out at the Santa Barbara Art Walk, he lamented his popular pieces. Steve had been taught in a style similar to that of George Inness, an 1800s American that celebrated the tamed landscape. Eventually, Inness represented the world as a garden, and so did Steve. The paintings were harmonious, soothing, beautiful.

The patch that Steve extolled to me was in the background of a field. In front of the tree line, a crudely painted bush demanded attention. The colors were not blended in the strokes, but asserted their own identify before submitting to life-like hues.

Steve has come back to that canvas again and again. The soothing grass now argues among the blades, as living grass does. The backlit trees grumble at the passage of the light. But that patch of brush still shouts over it all. It is out of character.

Crude brushwork is not the only technique that Steve has exercised in his expressive aggression. The palette knife is a favorite on boats – one thrusting boldly from a chaotic pier – and on monuments. Clouded shores and skies are summarized with thin washes that pool in gesso ridges. On trees silhouetted against sunlight, leaves dance as spatter drops.

I’ve argued with Steve without effect. He pleases his eye – and his eye is discerning. But art is a way of expressing the inner nature of things.  Rather than incomprehension, I sense a real resistance to this idea. He seems to not want to reveal himself that deeply to the world.

So I was astonished when, having pulled two art boards painted on the shore with the same palette, he pulled up two more. I think he was interested in which I liked the most, and I sorted them and said: “Steve, this is absolutely amazing.”

The first, largest piece is in his original style: designed to please, but generic – almost trite. It doesn’t convey the reality of the subject but an idea of a relationship we have with nature. Nature is to soothe. Nature is to conform to our sensibilities. 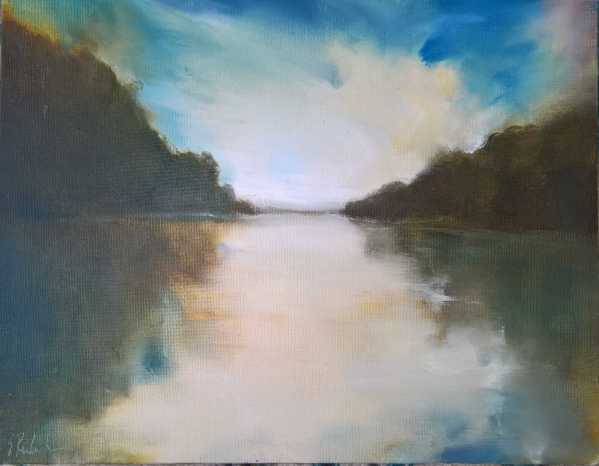 The next piece is obviously representative of a specific setting, but the textures of the paint still show the artist’s caution. Things shouldn’t bump too harshly against one another. The large fields caress one another even when they don’t yield. 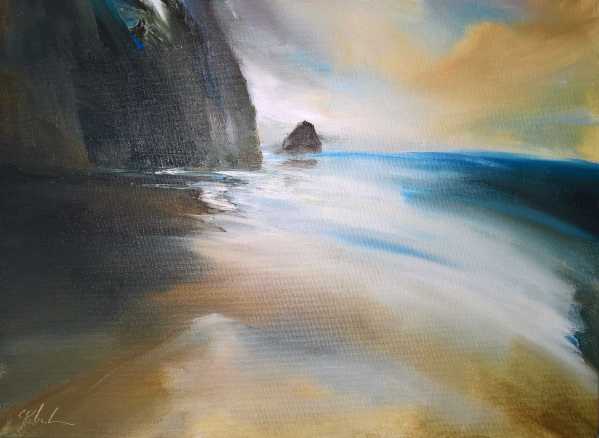 And then the third: the action of the finger is obvious, the fog imposing itself on the rock. In the foreground the energy of the wash is suggested by in the blurred vigor of the finger’s path. The paint reveals the physical feeling of its application. The eye submits to touch. 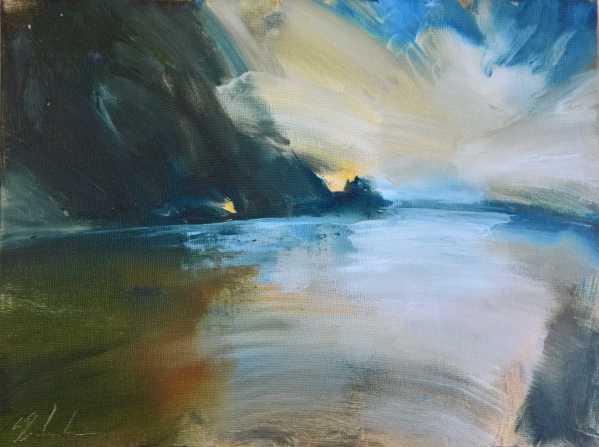 And finally, the artistic sensibility completely surrenders. The elements of the scene are offered in blotches. The rough edges of the rock argue with the sky and water – the stark blue of the latter only visible as a breaker that crashes against the cliff. The brownish sunlight blares from the wash and the billowed fog. The elements express their nature in contrast each to the other. 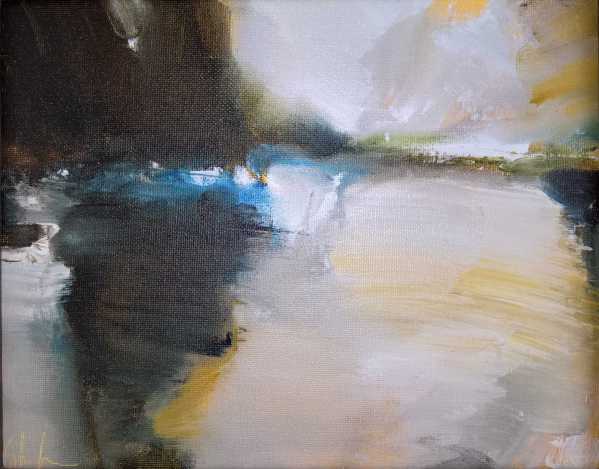 Seeming to me, as it were, as they were before they were ever seen at all – knowing each other only as fields of force, some less obdurate, but all seeking to assert their nature.

This is not the artist’s sensibility; it is not the human response: it is the expression of things in of themselves working through the artist.