I go down to the Cathedral of Our Lady of the Angels for Christmas and Easter each year. It forces the Church to confront certain realities. They manage these buildings, and so control whether and when the flock comes and goes. That tends to create some confusion regarding the nature of the shepherd, and many among them take offense when confronted with the authority of love.

So it is at the end of every age.

But while I was down in the crypt, I encountered this stained glass window in the baptismal chapel. Who knows which child, survivor of the school of tyranny, will rise to teach redemption to humanity? Who would turn away that hope? 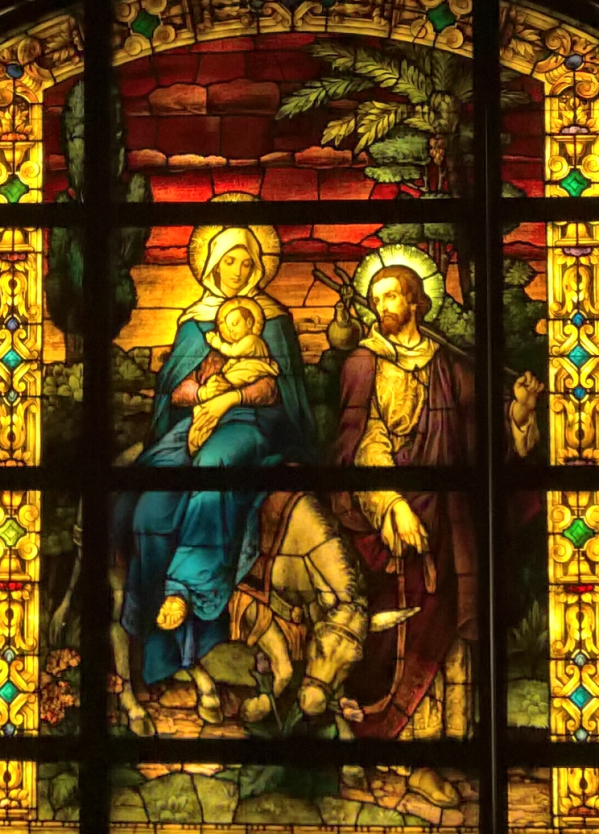 During the motorcade through Washington, Pope Francis elevated the human reality of our immigration crisis by calling to him a beautiful Hispanic child. The circumstances of the little girl’s arrival upon the guarded road are suspicious – even the mildly cynical would surmise that she was put there by an adult. The appeal for relief from fear for her parents was also remarkably mature. Of course, that may reflect the constant working of her thoughts against the pressure of her fear. Children are sometimes forced into maturity.

The Pope’s response to her was spontaneous, specific and human, having her lifted up so that he could embrace her. That it was this child that caught his attention may reflect a deep internal resonance of her experience with his own experience as the child of Italian immigrants to Argentina.

Unfortunately, that personal identification is a weakness in his appeal for immigration reform in America. It seems to generate in him a confusion over two very different motivations for immigration: the search for opportunity, and the flight from desperation.

The two narratives – of opportunity and flight – are mingled in the American story. Many of the settlers were fleeing religious or political persecution, but chose America (rather than another European country) because it was a place of opportunity. That opportunity was secured by the huge imbalance in cultural and immunological sophistication of the settlers relative to the Native Americans. These two factors supported population densities that guaranteed that the European tide would eventually sweep aside the native way of life.

But as of 1950 or so, that process had been concluded. The West was settled, parceled and titled to its new owners. The appeal of America shifted: no longer the land of unfettered opporunity, we became the “land of the free.” The “Statue of Liberty” was installed with a plaque that called for the world to send “your tired, your poor, your huddled masses.” But the logistics of arranging a trip across the ocean created a filter that biased the arrivals more towards the clever, industrious and opportunistic. This is cemented in current American immigration policy, where heavy preference is given to those that come with exceptional skills. With its mantra of freedom, America now draws to it the most productive citizens from states that do not respect political rights.

What is faced by the refugee – one among the many waves fleeing fear – is an entirely different reality. It is a world of abusive employment practices, first brought to national attention by Caesar Chavez and the United Farm Workers, but reborn in the housekeeping business and meat packing plants. It is a culture dominated by aggressive men who establish diasporas enforced by intimidation and violence. Does this represent a shift in American immigration experience? No, for European immigrants, arriving in the densely populated East Coast, often did the same. What is different is that there is now no geographical outlet for those pressures.

So the Pope’s plea for unfettered resettlement of refugees is a little tone deaf. Where are the immigrants to go?

To those that cherish liberty, there is also a moral quandry. What about the tyranny, venality and incompetence that creates a refugee crisis? Would the advanced democratic societies, in guaranteeing the safety of refugees, become unwitting codependents and victims to oppression? In taking in the most productive and resourceful citizens of the affected nations, are we not simultaneously sapping them of the capacity to resist and recover from the side-effects of oppression?

The Catholic Church, as observed by the Canadian philosopher John Hall in Powers and Liberties, has some experience with this problem. As the curator of Europe’s shared culture heritage (including Latin, the libraries and universities, and religious expression), the Church facilitated the flourishing of the Renaissance by issuing letters of introduction for those fleeing feudal oppression. This meant that seizure of wealth actually facilitated the dissemination of ideas and technologies that drove the generation of wealth. However, it was only with the industrial age that the benefits of that dissemination reached down to the lower class, generating the era of relative wealth in the developed nations.

So do we ignore the Pope’s plea?

As a Christian, I cannot. I cannot ignore the misery of those fleeing societal collapse. But I would argue that we should be far more focused in ensuring that the wealth that is transfered from our societies to refugees is organized to ensure that pressure is brought to bear on the originators of their misery.

The uncoordinated dispersal of refugees should be prevented. Rather, I would recommend that they be admitted as a diaspora, seeking to maintain their cultural identification. Refugees should be integrated in the economy, contributing their energy and drive. But they should be encouraged to maintain a political involvement in the affairs of their home country, including participating in cultural exchanges (perhaps within the borders of a third country) that transfer knowledge and experience to those that remain behind. And I recommend that a portion of their earnings be allocated, under State Department oversight, to efforts to bring justice to their country. Their ultimate goal should be full citizenship through return to a reformed state.

The Pope should reflect that Jesus did not flee tyranny, but submitted to its ultimate injustice, and in doing so inspired others to shake off the chains of their fear. Obviously, those that can emulate him are few in number. But the founder of the Catholic Church would exhort it to not cater to cowardice, but rather to encourage others to “pick up their cross.” Of course, there is much that the Western democracies can do to facilitate that process, and in supporting the flowering of justice when chains are eventually cast off.