I spent the afternoon out at Pine Trails Park here in Parkland. After checking in at the Resiliency Center, I wandered around the grounds, finally making my way out past the recreation center to discover the memorial for the fallen students and teachers.

I spent the next three hours holding space and giving back to the service animals that have been doing heavy duty over the last two weeks. On the whole, it was quiet. A few students showed, apparently to make sure the displays were holding up, but for the most part it was people from out of town, and at most twenty at a time.

So I had time to notice the unusual diversity of the butterflies. I saw individuals from four species.

I kept moving around, attempting to stay in the shade and out of the way, and noticed a mother and son – he about three or four – putting up a butterfly kite. Twenty minutes later, I saw him running up to the edge of the amphitheater, looking alarmed. Glancing up, I discovered that the kite was hovering over the stage. Thinking that the string must have unraveled too fast, I walked over to offer assistance, but his mother grabbed his hand and hurried him off.

Taking a closer look, I realized why. Magically, the string and handle had become wrapped around one of the stays on the shade screen. 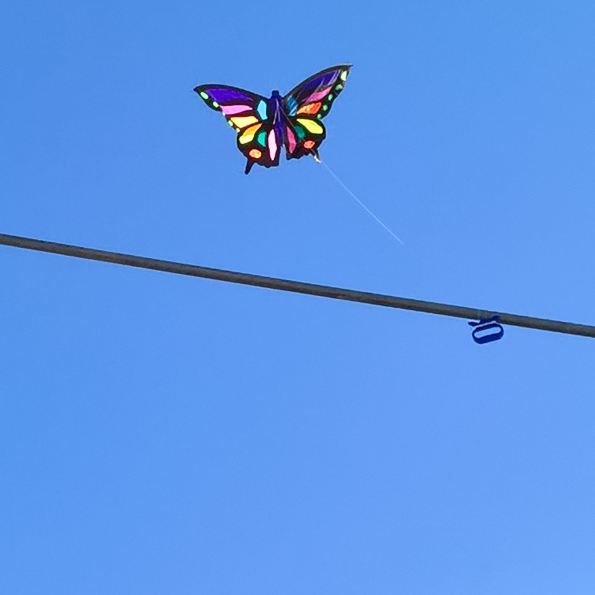 I eventually chased down a park attendant, who told me that the mother had come by to apologize for the accident. He rolled up to the stage ten minutes later, and asked whether I thought people would find it offensive. I laughed in surprise, and tried to convey to him that I found it delightful. My word choice – serendipitous – was probably unfortunate.

I tried to submit an item to the Sun Sentinel with a photo, but I don’t think it got through. That was the low point in my day. That child should be told what a wonderful gift he left for his fallen brothers and sisters.